Undergraduate Research to Mitigate Foot Pain is Off and Running 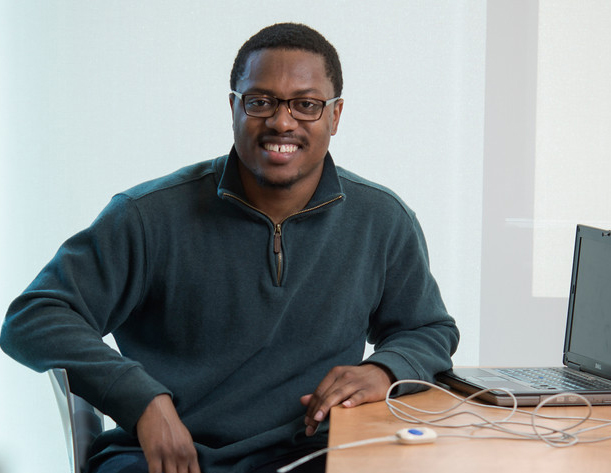 “It got to the point [where] it was just too painful,” he said.

Webb resumed running as a senior with the help of orthotics.

“A lot of people think if they just wear something more comfortable their foot pain will go away,” Webb said. “Maybe there is a better tool that can be more precise when you do these measurements.”

In spring 2015, Webb went to faculty members Jill Nelson, (electrical and computer engineering) and Qi Wei (bioengineering) with the idea of measuring foot pressure to better understand the pain he and others experience when standing/walking/running.

“After some discussion among the three of us, Bradford decided to explore the link between the size and height of the foot arch and pressure measurements at various points on the foot,” said Nelson.

He plans to monitor the people in his study by placing sensors in shoes that will record pressure at various points on feet during a 50-yard walk. The data will transfer by wire to a laptop Webb will carry as he walks with his subjects. He then will analyze the aggregate values.

Because he has only one sensor, subjects will have to walk multiple times with the sensor on different points of their feet. Time-consuming, but worth the effort, Webb said.

Since he began his research he has presented his work at various competitions and conferences. Webb also successfully navigated the Institutional Review Board approval process so he can conduct tests on others and talked with several companies to understand what sensor options are available and select the best one.

“Qi and I provided guidance and feedback,” said Nelson, “but Bradford has taken ownership of this research project throughout the process. His enthusiasm for research is unmatched. This year he was selected to serve as an OSCAR Fellow and will be an advocate for undergraduate student research at Mason.”

A version of this story by Damian Cristodero originally appeared on the News at Mason web page.