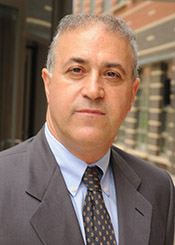 Bijan Jabbari has been active both in the academia and the industry and is recognized internationally for his contributions to the field of wireless networks. His patents are being deployed in the 4G, LTE and 5G wireless networks. He is a Fellow of the IEEE and a Fellow of the IET. He is a recipient of the IEEE Third Millennium Medal, Washington DC Metropolitan Area Engineer of the Year Award and received the GMU VSE Outstanding Faculty Research Award. He is the past chairman of the IEEE Communications Society technical committee on Communications Switching and Routing. He has founded innovative laboratories for internet and wireless communications and is conducting research through funding provided by National Science Foundation and other funding organizations.

Dr. Jabbari is a coeditor of several books and was the area editor on multiaccess for the IEEE Transactions on Communications, was an International Division Editor for Journal of Communications and Networks (JCN) on wireless communications and was on the editorial board of Proceedings of the IEEE and several other journals. He has been a technical advisor to the industry and the US, France, Japan and Korea Republic governments. He helped industry adoption of Multiprotocol Label Switching (MPLS) by service providers and large corporations in their networks. Dr. Jabbari is also an affiliated faculty with Telecom Paris-tech, France. As a volunteer in civic and humanitarian activities, Dr. Jabbari co-founded the American Heart Association’s annual event Heart’s Delight, the premier annual wine tasting and auction in Washington, which in the past 20 years has brought over $20 million for research to this association.

2010 - 2011: Secure Protocols and Services for Resilient Internetworking. Funded by Office of Naval Research.